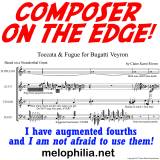 By popular demand, the 'Composer on the Edge' T-shirts! 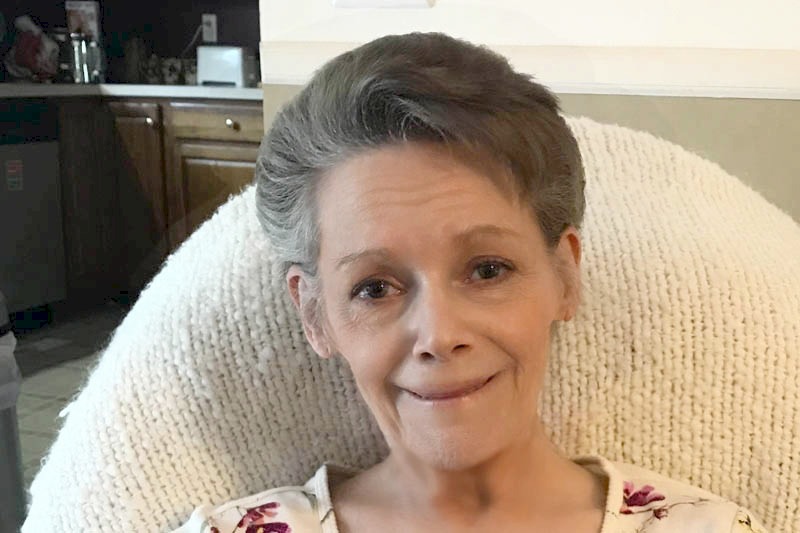 A Dean's Scholar Graduate in Music and Theater from California State University Dominguez Hills, Claire Karst Rivero has created an impressive body of work over the last quarter of a century, including scores for numerous theater productions, music for radio and TV commercials, plus serious music ranging from classical to jazz, vocal and instrumental. Claire has written over seventy original works for individual artists and for choirs, three of which she has founded and conducted.
Claire's composition credits include original music for the Los Angeles Variety Arts Theater, the sound track for the documentary film, "Soul of the Steel", theme music and incidentals for the TV series, "Hawaii's Reel Stories", and themes and intros/outros for the "What Really Happened" radio show.
Claire's fine arts compositions, "Lord Make me an Instrument of Thy Peace", based on the prayer of St. Francis, has been performed by the Schola Cantorum of the National Shrine of St. Francis of Assisi in San Francisco and the First Lutheran Church of Honolulu. Claire's work, "Place Your Mind in the Mirror of Eternity", based on the prayer by St. Clare of Assisi , has been premiered by the Hawaii Vocal Arts Ensemble. Claire's fine arts compositions are published by Fred Bock Music, distributed by Hal Leonard and Zimbel Press. Claire is a member of ASCAP, The American Choral Director's Association, the National Association of Composers, and the National League of American Pen Women. Claire is co-owner of Home Baked Entertainment, an Indiana-based commercial production company. Claire can be reached at or 808-295-7391.
CLAIRE IN SPACE! Back when the International Space Station launched, Claire overheard the crew talking about how much they enjoyed the availability of music on the station since the ground broadcasts were not really music quality, so Claire mailed a copy of her album "Isle of Sanctuary" to the appropriate office at the Johnson Space Flight Center in Houston. We did not expect an acknowledgment, however Claire's name was one of those selected to be etched in a microchip placed aboard NASA's STARDUST mission!

"Claire Rivero is one of the most dedicated and well-rounded musicians with whom I have ever worked: a terrific choir director - always prepared, gracious but firm as a conductor; talented as an arranger; able to incorporate technology into her music - a great plus for these online times in which we are living; gifted as a composer; and a truly wonderful human being. I give her my highest recommendation." -- Pastor Tom Choi

"It is my distinct honor and privilege to recommend to you in the strongest possible terms Claire Rivero as over-all music minister, choir director, or whatever position you might have available in your church or other organization. A true artist, Claire has wonderful musical skills in leading, arranging and performing both music which is composed by others as well as her own compositions. Hard working and dependable, Claire always had a bright and sunny disposition and is a wonderful encourager who is able to draw out the musical abilities of the congregation and especially those in her choirs. She worked with the children’s choir, and led the Women’s and the Men’s and Women’s choirs. She proved invaluable to me in putting together the musical program at Aiea United Methodist Church, a church with an average weekly worship attendance of nearly 200. This included the weekly hymn and anthem on Sunday mornings and special services, especially the predominantly music services of Advent, Christmas, Holy Week and Easter, planning and rehearsing and performing. For the nearly three years she worked for me at AUMC she always came through with a professional product and never once dropped the ball. Always a team player she cheerfully met and exceeded all my expectations. The choirs simply adored her and so did I. Her departure to the mainland to be closer to family was a huge loss for the church, and I can promise you a huge gain for you if you are so fortunate as to be able to bring her on board. Please do not hesitate to contact me if you have any questions. -- Pastor Rob Lloyd

Music is the one true universal language.